Yesterday, this was my breakfast: 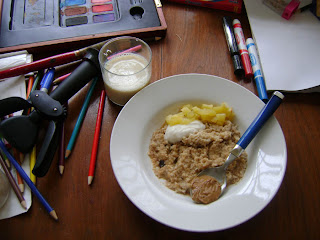 Today, this was my breakfast: 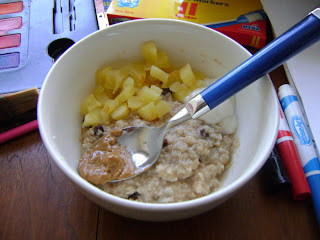 See the resemblance?
They're related Except the soy milk, she was just a sour ex wife. Those are microwaved (ick) quick oats with a dollop of yogurt, microwaved (yum) apple cubes, and some Cinnamon Raisin Peanut butter.
"I thought you hated peanut butter?"
Well, I do. I can handle the flavored ones, though. I am not at home and I had to travel-ize my breakfast. Store bought peanut butter keeps without a fridge, my homemade almond butter does not. You see the size difference in the two days? Yeah, I had to downsize to choke the stuff down. But it's good for me.

Anyhow, I certainly prefer making oats on the stove top, how about you all? I made a container of oats, cinnamon, allspice, Splenda, and raisins. I made my own mix because I don't like mystery ingredients in store bought ones.

While I was eating my breakfast(s) I had this guy following my spoon, plate-to-mouth with his eyes. His big, adorable, sweetheart eyes. 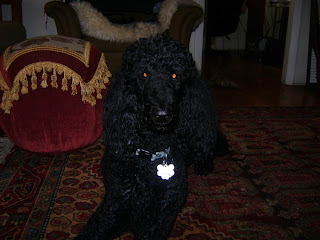 Then there was some tug of war with this rabbit: 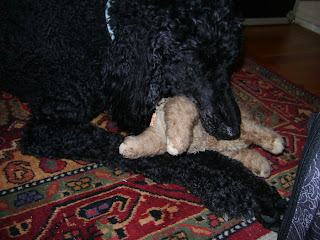 Then we napped. Actually, yesterday I had three naps.
"What in the world?? Lazy ass."
I will take that criticism, but I was not feeling well. I believe it was a combination of skipping dinner the night before, having bad soy milk for breakfast, (oh yeah, sour, icky soy milk) and it all got worse when I skipped lunch. I had a headache and a tummy ache all day. I thought I was dehydrated but I'm pretty sure it was the above mentioned things because I was hydrating regularly.

There is a good amount of watermelon being eaten too quickly to photograph. Oh yeah, I brought it with me. There is also this grapefruit: 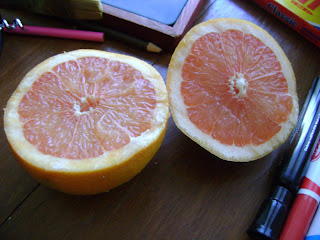 Yummy.
"What's with the markers in all these pictures? Are you teaching kindergarten, now?"
Nope. My friend is an artist, you see. His kitchen table does not get used for much kitchen-ness.

Today I learned from my mistakes and ate lunch. 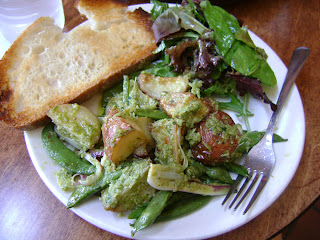 Mmmmm. This was at a bakery in the Nashville area called Provence. The sourdough bread was really good and it had a great environment with art displays and such. The dish was comprised of roasted red potatoes, sugar snap peas, red onion, fennel, and pesto with mixed greens and a slice of sourdough on the side.

Dinner is going to be sort of boring but I have a feeling I'm going to have to make an ice cream run. It's summer, after all. It'll probably be sugar free as to not turn me into a zombie.

Side note: I have a food diary where I track what I'm eating, it helps me stay organized and think out what more I need to balance meals. It is also helping me add calories. I have begun writing reminders or things to motivate me by in the margins. I'm going to post them here sometimes. These are a couple.

Do not skip meals.
Do not feel guilt over guilt-less meals.
Do not be afraid to eat ice cream when your friend's apartment doesn't have central air and it's hot as Hades outside, or just when you want to.