I would just like to point out that my blog has made a breakthrough. She just had her first post with three comments! Thank you all for reading and commenting! I feel like a dork for being so happy about three heh....

Moving on, I slept off that headache from dinner to dawn except when I woke up it wasn't quite dawn yet. I still filled my belly with grains and dairy: 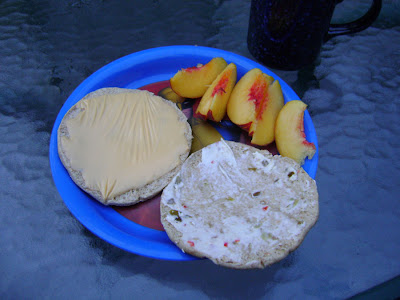 Cheese toast, toast with jalapeno cream cheese from Bruegger's Bagels, and a peach! I added some caf to my regular decaf today to help rid myself of headache residue. The morning after a migraine is like a hangover. Get yourself some Tylenol and coffee and hopefully you're set.

My dad had the air conditioner guys over all morning so I didn't do my yoga. By the time they left I was unmotivated and hungry. 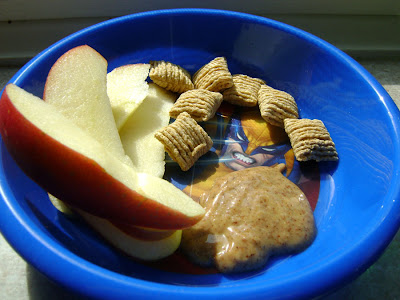 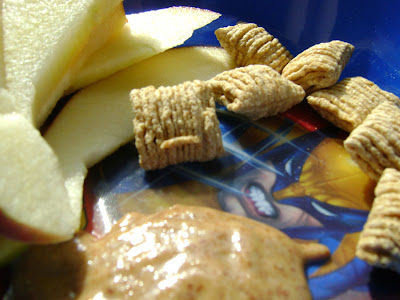 I finished off my Justin's for lunch. *sadface* 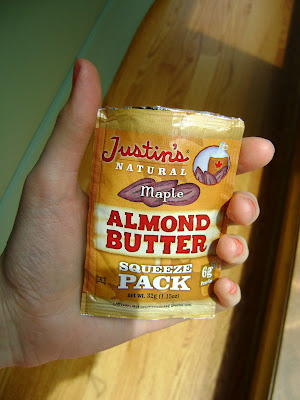 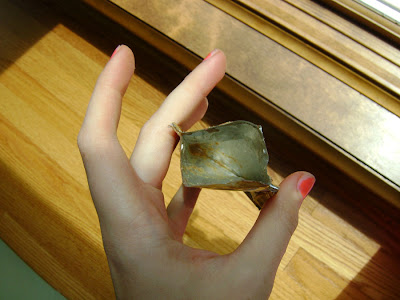 But it was put to good use! 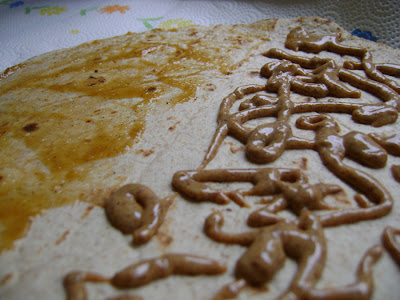 It's paired with some of my "Autumn Butter" (recipe coming soon!) 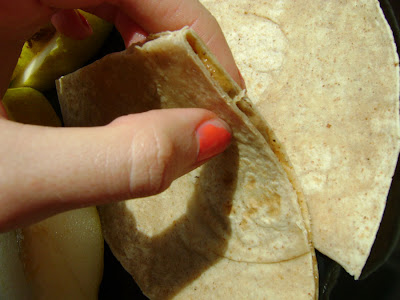 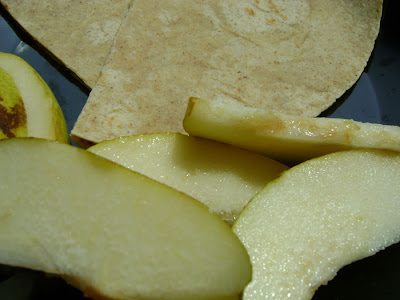 I ate it with some juicy, crisp pear slices.... 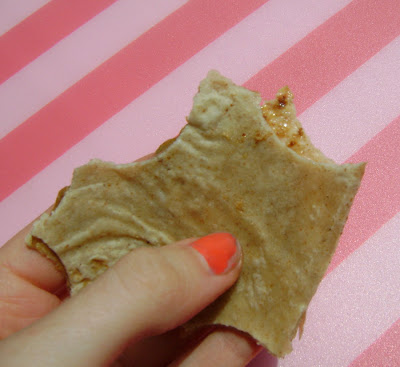 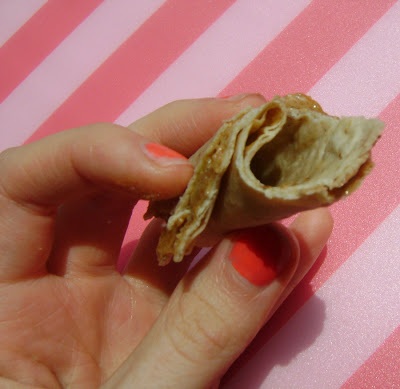 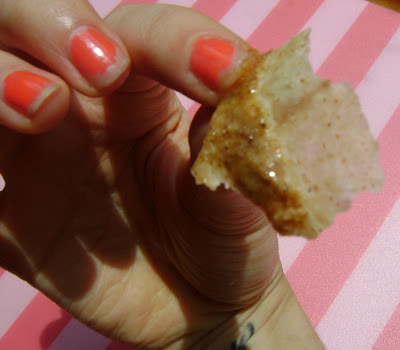 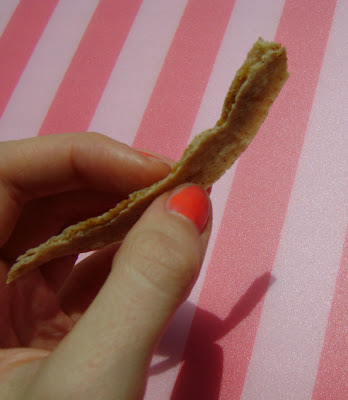 For an afternoon snack I had a Payday! 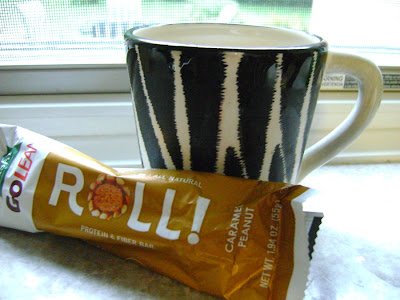 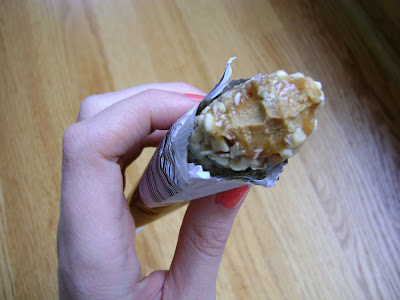 Except not really but that thing tasted JUST like a Payday but without the sticking-to-my-teeth-omg-cavity feeling! Yummy. It honestly took me a while to figure out what it tasted like since it's been years and years since I've had a candy bar!

You guys...I had the most massive salad ever for dinner: 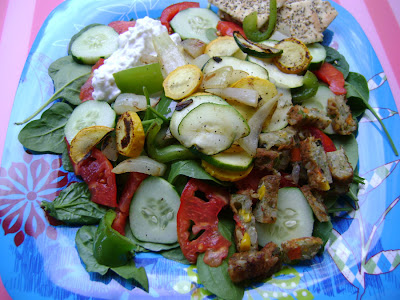 Seriously, this thing was huge. 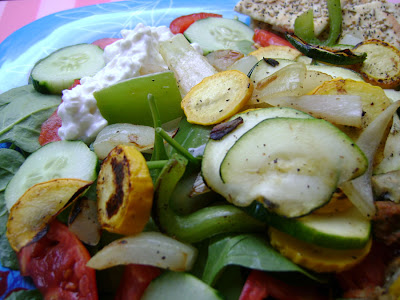 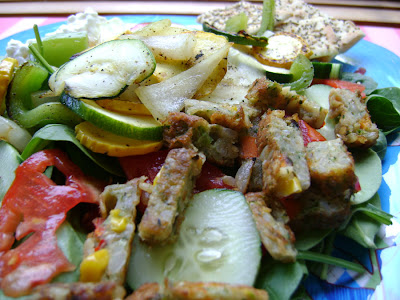 And even my favorite crackers. 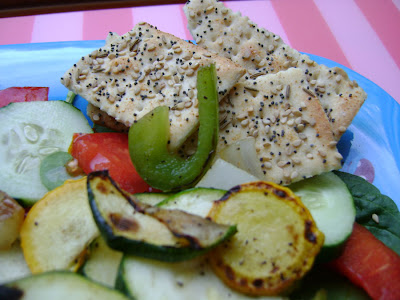 I ate it with a little bit of this. 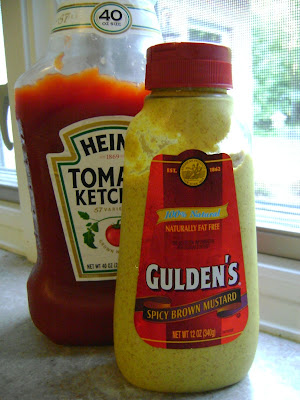 Nom. Stuffed Kittie found room for some frozen yogurt a bit later on: 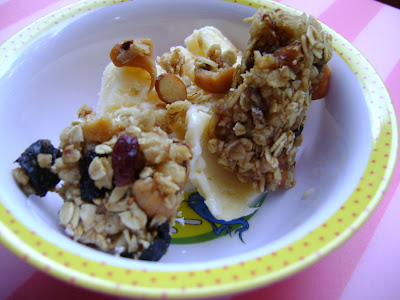 Topped with a homemade granola bar.

Alright. I have something I want to say. I have a couple reasons for not riding my bike this week but one reason is because I'm tired of the people. The people on the trail are jackasses, for lack of a better word. I get scowled at and nearly run over on purpose because I don't have the right bike or the gear. Last week an old man in spandex actually yelled at me. He yelled because I was "in his way." I wasn't. I was so close to my edge that he nearly pushed me over.
I don't know how to get motivated to do this anymore. I prefer the gym but I don't have gym access again until the end of August when school starts back. I love working out but not here. And I have the hardest time getting motivated for at home workouts.
I need motivation and I don't know where to find it.